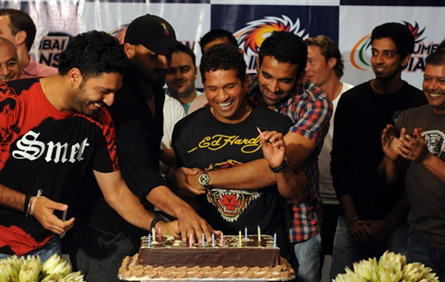 The Little Master Sachin Tendulkar turns 40 today. In an incredible 24-year journey in international cricket, Tendulkar thanks his family for its support and the fans for making him what he is, a genius!

Sachin Tendulkar’s birthday is a special time to celebrate that god gifted him to the world for cricket. God knew cricket game after he born in this world. He you touched our heart. You’re a gifted by god to the entire Cricket world.

Sachin Tendulkar's Biography -
Sachin Tendulkar a boy of 16 walks in to bat against the fiery attack of Waqar Younis and Wasim Akram and is hit on the head, even then this little boy goes on to make half century. This boy was none other than the phenomenal Sachin Tendulkar. Sachin Tendulkar, the very name that strikes terror in the hearts of the bowlers all over the world, is regarded as the most accomplished batsman of modern day cricket. Since his debut against Pakistan in 1989, Sachin Tendulkar has been shining like a star in the international cricketing arena.


Ever since Sachin made his debut against Pakistan at the age of 16, he has not looked back. Sachin has piled up runs against all teams in the world. Sachin Tendulkar is rightly hailed as the master blaster as he treats most of the bowlers with utter disdain. This man employs almost every shot mentioned in the cricketing manuals. Sachin Tendulkar is capable of tearing apart any bowling attack.

The most fascinating part of Sachin's batting is that he keeps improvising the shots in his armory. In the last 16 years of his carrier, Sachin has won almost every award associated with cricket. At present Sachin is the highest run getter (over 13000 runs) in the one day form of the game and is inching towards becoming the highest run scorer in the test cricket as well. Sachin also has the maximum number of test and one day centuries to his name.

Turning Point
Initially Sachin Tendulkar wanted to be a fast bowler and even undertook trials at the MRF pace foundation, Chennai, but his short height proved to be an obstacle. Changing his school to Shardashram Vidya Mandir and meeting Mr. Ramakant Achrekar (who became his coach) was the turning point of Sachin's cricket career.


Playing for his school, Shardashram Vidya Mandir, Sachin along with his buddy Vinod Kambli set a world record partnership of 664 runs for the third wicket. There was no looking back after that. Sachin became the only player to score a century on debut in all three domestic first class competitions- 100 not out in the Ranji Trophy (Bombay v Gujarat at Bombay 1988-89), 159 in the Duleep Trophy (West Zone v East Zone at Guwahati 1990-91) and 103 not out in the Irani Trophy (Rest of India v Delhi at Bombay, 1989-90).

This was the beginning of what Sunil Gavaskar called an illustrious cricketing genius. Such was the promise and prospect of this little boy that during a local match the umpire deliberately didn't declare him out just to show the class of Sachin to one of his friends, a former cricketer.


Sachin Ramesh Tendulkar was born on April 24, 1973, in Mumbai. Sachin's father, Ramesh Tendulkar was a professor of Marathi. Seeing loads of promises in his younger brother, Ajit Tendulkar (Sachin's brother) decided to guide Sachin in the early stages of his life. Ajit took his kid brother to Mr. Ramakant Achrekar, arguably the best cricket coach of his times. It was because of cricket that Sachin had to change his school and had to stay at his uncle's place.

Mr. Achrekar was thoroughly impressed by this little boy. Achrekar could see the world champion in this little boy. He was satisfied beyond doubt that Sachin had huge potential and hunger to succeed at the highest level. Slowly and gradually Sachin started making waves in the local cricket of Mumbai. And it was not long before Sachin got to play his first Ranji trophy match against Gujarat in 1988-89. Sachin went on to make 100 not out in his very debut 1st class match; it was not a surprise for those who knew him!


After some initial hiccups, there has not been any real stumbling block in cricketing carrier of this"Bombay Bomber". The little genius, as Sachin is fondly called, has been performing consistently for the country ever since he started playing cricket for India. But every champion has some lean patches, Sachin too had some.

Sachin's tremendous performances soon elevated him to the most challenging task of captaining the Indian side. But sadly this pressure had its toll on Sachin's batting. Many criticize Sachin of not delivering the goods in crunch situations. In recent years Sachin has not been in scintillating of forms and his genius has been visible only in parts. While criticizing him we must not forget that Sachin has been round the corner for the last 16 years.